Map of Anguilla. Image courtesy of Wikipedia.
Posted by Mark D. Williams at 1:07 PM No comments: 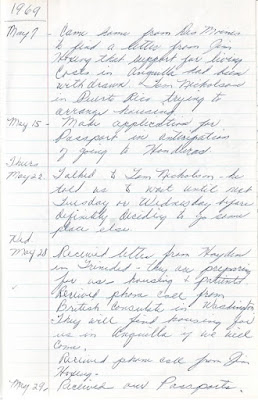 May 7 - Came home from Des Moines to find a letter from Jim Hoxeng [?] that support for living costs in Anguilla had been withdrawn. Tom Nicholson in Puerto Rico trying to arrange housing.

May 15 - Made application for passport in anticipation of going to Honduras.

Thurs.
May 22 - Talked to Tom Nicholson - he told us to wait until next Tuesday or Wednesday before definitely deciding to go someplace else. 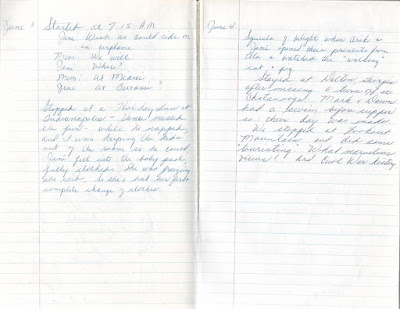 
Jené: Wish we could ride on an airplane.
Mom: We will.
Jené: Where?
Mom: At Miami.
Jené: At Ourami?

Stopped at a Holiday Inn in Indianapolis. Vince missed the fun. While he napped, and I was keeping the kids out of the room so he could, Jené fell into the baby pool, fully clothed. She was freezing, she said. So she's had her first complete change of clothes.

June 4 - Squeals of delight when Arik & Jené opened their presents from Ella [Graves] & watched the "walking" cat and pig.

Stayed at Dalton, Georgia after missing a turnoff at Chattanooga [TN]. Mark & Dawn had a swim before supper so their day was made.

We stopped at Lookout Mountain and did some "touristing." What marvelous views! And Civil War history. 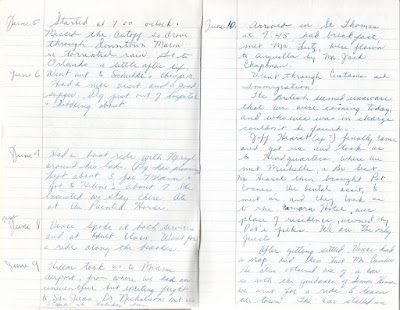 June 5 - Started at 7:00 o'clock. Missed the cutoff so drove through downtown Macon [GA] in torrential rain. Got to Orlando [FL] a little after six.

June 6 - Went out to Schulke's this p.m. Had a nice visit and a good supper. Peg just out of hospital & hobbling about.

June 7 - Had a boat ride with Merryl around his lake. (Peg has pleurisy) Left about 3 for Miami [FL] & got to Helene's about 7. She insisted we stay there. Ate at the Painted Horse.

Sun.
June 8 - Vince spoke at both services and at Adult Class. Went for a ride along the beaches.

June 9 - Helene took us to Miami airport, from where we had an uneventful but exciting flight to San Juan [PR]. Dr. Nicholson met us. Stayed at Holiday Inn.

Went through Customs and Immigration.

The British seemed unaware that we were coming today, and whoever was in charge couldn't be found.

Jeff Hearst (sp?) finally came and got us and took us to Headquarters, where we met Michelle, a Br. Sect. Mr. Hearst then brought Pat Connor, the dental ass't, to meet us and they took us to the Camora Hotel, our place of residence, owned by Pat's folks. We are the only guests. 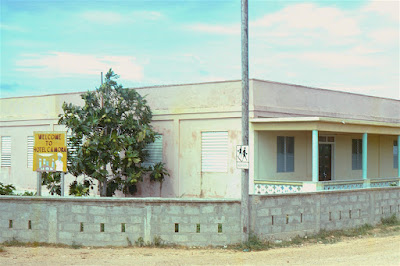 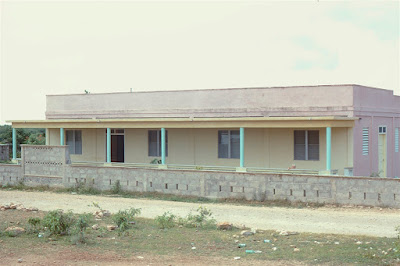 Hotel Camora (front). Jené's head may be seen peaking out from under the right window. Photo Credit: Vince Williams.

After getting settled, Vince had a nap and then met Mr. Cumber. He also obtained use of a car so with the guidance of Simon Herman [?] we went for a ride to learn the town. The car stalled in

[Continued on next page.]
Posted by Mark D. Williams at 1:44 PM No comments: 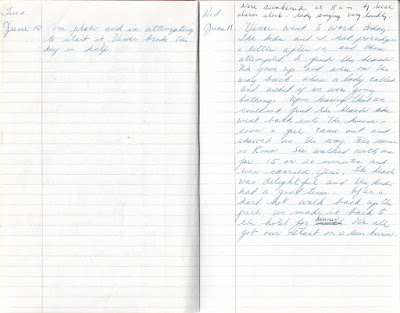 Tues.
June 10 [cont.] one place and in attempting to start it Vince broke the key in half.

Vince went to work today. The kids and I had porridge a little after 10, and then attempted to find the beach. We gave up and were on the way back when a lady called and asked if we were going bathing. Upon hearing that we couldn't find the beach she went back into the house. Soon a girl came out and showed us the way. Her name is Rona. She walked with us for 15 or 20 minutes and even carried Jené. 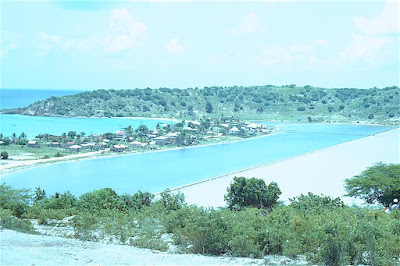 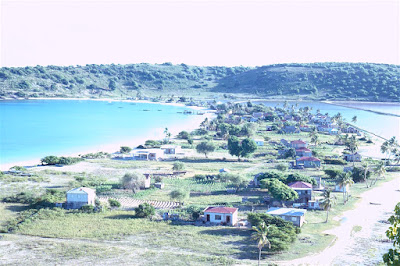 Sandy Ground beach. Photo Credit: Vince Williams. If driving we would often park near the modern house in the middle of the photo. 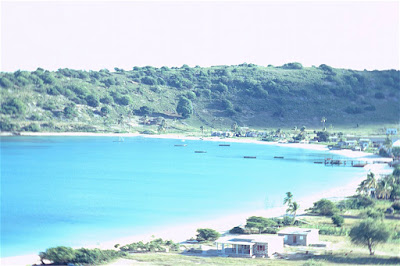 Sandy Ground beach even closer. Photo Credit: Vince Williams. The modern house is at the bottom. 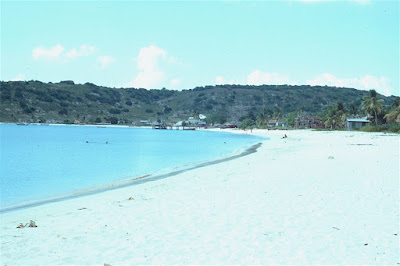 The beach was delightful and the kids had a good time. After a hard hot walk back up the path, we made it back to the hotel for lunch dinner. We all got our start on a sun burn.
Posted by Mark D. Williams at 12:23 PM No comments: 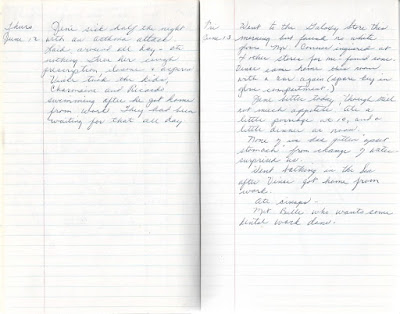 Thurs.
June 12 - Jené sick half the night with an asthma attack. Laid around all day - ate nothing. Gave her cough prescription, ilosone [erythromycin] & aspirin. Vince took the kids, Charmaine and Ricardo swimming after he got home from work. They had been waiting for that all day.

Fri.
June 13 - Went to the Galaxy Store this morning but found no white gloves. Mr. Connor inquired at 4 other stores for me - found none. Vince came home this noon with a car again (spare key in glove compartment).

Jené better today, though still not much appetite. Ate a little porridge at 10, and a little dinner at noon.

None of us has gotten upset stomach from change of water - surprised us.

Went bathing in the Sea after Vince got home from work.

Ate cinaps. [Guineps. Ovoid green fruit that grows in bunches on trees up to 30m high. The fruit typically ripen during the summer. The fruit is related to the lychee and have tight, thin but rigid skins. Inside the skin is the tart, tangy, or sweet pulp of the fruit covering a large seed. The pulp is usually cream or orange coloured.]

Email ThisBlogThis!Share to TwitterShare to FacebookShare to Pinterest
Labels: Guineps

A Parade for the Queen 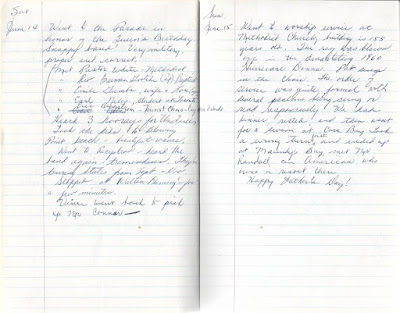 Sat.
June 14 - Went to the Parade in honor of the Queen's Birthday. Snappy band! Very military, proper and correct.

Heard 3 hoorays for the Queen.

Stopped at Walton Fleming's for a few minutes.

Vince went back to pick up Mr. Connor. 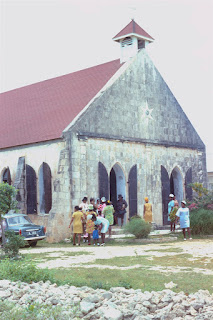 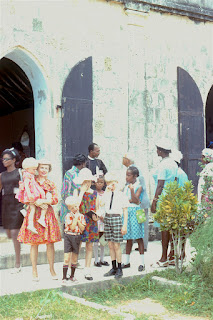 Sun.
June 15 - Went to worship service at Methodist Church, building is 155 years old. The roof was blown off in the devastating 1960 Hurricane Donna. Pat sings in the Choir. The order of service was quite formal with several psalms being sung or read responsively. We had dinner, rested, and then went for a swim at Cove Bay. Took a wrong turn ^first and ended up at Maundy's Bay, met Mr. Randall, an American who owns a resort there.

Happy Father's Day!
Posted by Mark D. Williams at 10:18 AM No comments: 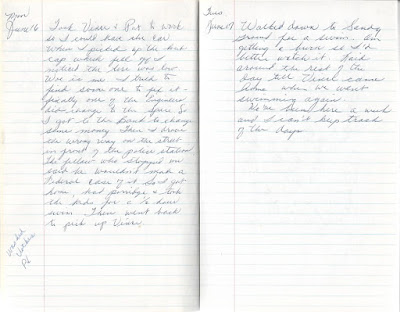 Mon.
June 16 - Took Vince & Pat to work so I could have the car. When I picked up the hub cap which fell off I noticed the tire was low. Woe is me. I tried to find someone to fix it - finally one of the Engineers did change to the spare. So I got to the Bank to change some money. Then I drove the wrong way on the street in front of the police station. The fellow who stopped me said he wouldn't make a federal case of it. So I got home, had porridge & took the kids for a 1/2 hour swim. Then went back to pick up Vince. 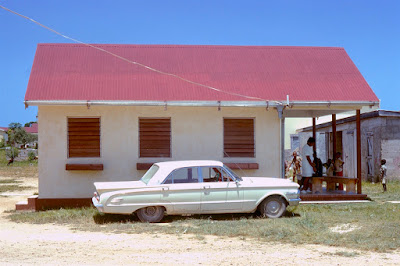 The car in front of the Dental Clinic. Photo Credit: Vince Williams.

Tues.
June 17 - Walked down to Sandy Ground for a swim. Am getting a burn so I'd better watch it. Laid around the rest of the day till Vince came home when we went swimming again.

We've been here a week and I can't keep track of the days.
Posted by Mark D. Williams at 5:09 PM No comments:

Swimming, Shopping, and the Mobile Clinic 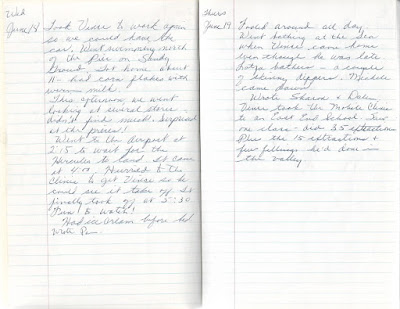 Wed.
June 18 - Took Vince to work again so we could have the car. Went swimming north of the Pier on Sandy Ground. Got home about 11 - had corn flakes with warm milk.

This afternoon, we went looking at several stores - didn't find much. Surprised at the prices!

Thurs.
June 19 - Fooled around all day. Went bathing at the Sea when Vince came home even though he was late. Lotza bathers - a couple of skinny dippers. Michele came down. 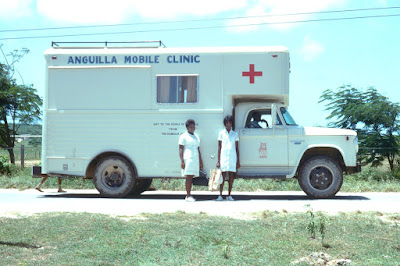 Wrote Sharon & Dalen. Vince took the Mobile Clinic to an East End school. Saw one class - did 35 extractions. Plus the 15 extractions & few fillings he'd done in the valley. 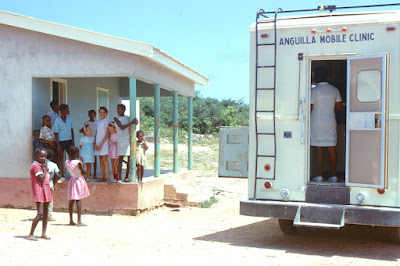 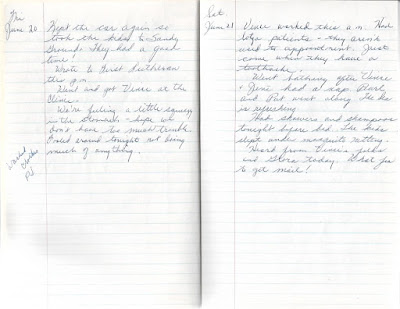 Fri.
June 20 - Kept the car again so took the kids to Sandy Ground. They had a good time!

Wrote to First Lutheran this p.m.

Went and got Vince at the Clinic.

We're feeling a little queazy in the stomach - hope we don't have too much trouble. Fooled around tonight not doing much of anything.

Sat.
June 21 - Vince worked this a.m. Had lotza patients - they aren't used to appointment. Just come when they have a toothache.

Went bathing after Vince & Jené had a nap. Pearl and Pat went along. The Sea is refreshing.

Had showers and shampoos tonight before bed. The kids slept under mosquito netting. Heard from Vince's folks and Glora [Bakken] today. What fun to get mail!
Posted by Mark D. Williams at 8:56 AM No comments:

Welcome to Mom's Anguilla Diary. This blog is a collection of journal entries written by my mother, Verla (Blakey) Williams, along with pictures taken by my father, Vincent D. Williams, while our family was visiting the Caribbean island of Anguilla in the Summer of 1969. My father was doing dentistry there for Lutheran World Relief. Many thanks to Robert Boyd for digitizing Dad's 35mm slides.